I’ve been seeing signs all over the place lately by Thames Valley Police which say “This is a Low Crime Area.  Help us keep it that way.”  On the other side of the sign it tells you to lock stuff in your car and take valuables with you etc. 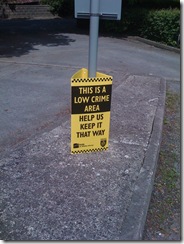 It strikes me as funny because very rarely are you told that you don’t need to be vigilant.  The sign in the picture was posted in a park.  I walked into the park with my usual level of caution (don’t talk to strangers, etc), but then saw the sign and realised I could take my wallet out and start counting my money right there on the street.  There are no signs like this posted outside the park, so I assume this must be some kind of sanctuary against crime!  Once I leave the park, I need to be careful again.

I wonder how much this sign campaign cost.  I’ll bet it is a ridiculous amount– in the tens of thousands of pounds county-wide.  I wonder how much crime it actually stops.  Someone must have said “Let’s put signs up everywhere where there is little crime, just in case.”  How will they know it works?  If it is still a low crime area six months from now, does that mean the sign campaign was successful?

Or . . . is it merely a CV point for an public official to say they are “doing something about crime”?

This sign is posted in Oxfordshire in England, but you get the same kind of stuff in the States.

Growing up in San Diego, there were always public service signs and posters up everywhere–most of the time, no one paid any attention to them.  In school, the hallway walls were plastered with posters of Rob Lowe and Brooke Shields that had giant slogans telling you to stay away from drugs, smoking, sex, etc.  No one ever stopped to look at these posters– they were always just there.  Someone somewhere spent a ton of taxpayer money to produce them, but no one cared.

Sure, putting up signs everywhere to reduce crime sounds like a good idea–but it also sounds like an expensive idea.  The problem is there is no way to measure how effective they are.  Our governments are so far in debt, that these kind of luxuries need to be looked at.

I didn’t mean for this post to be a rant– just a picture of a funny sign.  I’ll try to post a picture of this sign in a few weeks– after it has been vandalised.