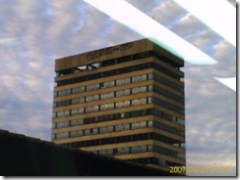 I’m not really a great fan of graffiti, but you can’t help but admire some of it. In my area growing up, you saw of lot of it. There’s the tame stuff you find in toilet stalls or phone boxes which just seem to be a waste of time.

But some graffiti is truly impressive. I don’t mean impressive in a “Beat Street” sort of artistic way– I mean impressive because you don’t know how someone was able to do it. In San Diego growing up, you would see it on freeway overpasses which must have been very dangerous for whoever carried out the vandalism. Whoever it was, they weren’t thinking small.

For the last month, I’ve seen another impressive bit of graffiti from the train each morning in Reading on my way into London. It’s been there for at least a month. Someone has somehow painted the largest tag I’ve ever seen on the top one of the tallest buildings in the center of Reading. Have a look at the picture.

Like I said, it’s been up there for at least a month (probably longer) and I don’t know how the landlord will be able to paint over it without some pretty expensive painters with mountain climbing equipment.

But, really, how was someone able to do this without being noticed? I have no idea what it means and it isn’t that legible (I think it says “Stenc the CUP”?).

I would complain about it being an eyesore, but the reality is that Coca Cola (or any other big business) would put a billboard up there in a second if they could. If I had to choose, I would prefer it be this daredevil vandal instead.