I returned from 2 weeks holiday in Beijing just a few days ago.Â  Iâm still suffering from some food poisoning I picked up over there, so Iâm not entirely at 100%. 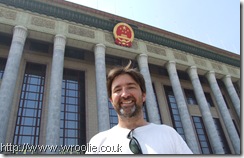 Thereâs so much to talk about Beijing.Â  Itâs difficult to know where to start.Â  Iâll probably have more than one post on this trip, so I hope it doesnât bore anyone.

I spent most of the time speaking Mandarin.Â  Iâve been studying it for so long that it often felt odd listening to so many people speak it too.Â  A lot of people out there speak a tiny amount of English but a surprising amount spoke none.Â  When I spoke Mandarin, people seemed to really appreciate it and enjoyed having conversations on various subjects.

For this trip to China, we went as a family.Â  It was good for the kids to see another country and experience what another culture is like.

I have three sons- aged 4 to 11.Â  This turned a lot of heads.Â  Everywhere we went, people would comment on our children or we would hear them commenting to each other (âä¸ä¸ªå ¿å­â) about how many kids we have.Â  Many Chinese people would stop and tell me how strong my family is.Â  Some told me about the one-child policy and we did feel very guilty for bringing three.Â  Some asked me how many we were allowed to have in England.

When I imagined going to Beijing, I imagined going to Epcot Centre.Â  I figured that since the Olympics last year, the place would be entirely Westernised.Â  If I wanted to see âReal Chinaâ, Beijing might not be the place to do it.Â  I expected to see mostly Westerners and everything would cater to us.Â  But I was wrong.Â  We saw very few Westerners at all.Â  The ones we did see were Russians.Â  I saw no Western kids at all.Â  Most of the people we spoke with were tourists from around Chinaâmaking a trip to their nationâs capital.Â  So, we, a family of 5, were the object of much interest.

In our first day in Beijing, while walking along the Wangfujing shopping street, we were frequently stopped by Chinese people asking to take their pictures with us.Â  I noticed a lot of other people took out pictures without asking at allâlike you would take pictures of animals in the zoo.Â  Once a few people posed for pictures with us, people started to swarm and everyone wanted to add us to their photo albums. Some people wanted pictures with only the kids.Â  Some young ladies wanted their pictures taken with me alone (the extra weight doesnât matter in China, I guess).Â  For a while, I thought they might have mistaken us for someone famous (like that guy last year shouting âIâm not Michael Phelpsâ while everyone crowded around him).Â  It was a lot of fun, actually.Â  We felt like we were famous.Â  It was coolâon the first day!

Everywhere we went, we would be stopped at least once for a photo opportunity with someone.Â  We posed with everyoneâkids, parents, teenagers, and a family even made their old grandmother sit down next to us on a curb in Tiananmen Square to take a picture.Â  After a week, whenever someone would walk up to us carrying a camera, we would start to pose.

After a few days, my younger boys started to protest and make faces when people took their pictures.Â  We tried to explain how this is not polite and that they should smile, but it really did become overwhelming after a while.Â  The standard pose for pictures in China seems to be the two-finger peace symbolâso thatâs how we posed.

Once, while riding a hired boat in the lake at Beihai Park, a family followed around the lake in their boat for about 20 minutes until we stopped and let them circle around us to take a picture.Â  We sat in our boatâeveryone making a peace symbol and smiling.

All over China, people are returning from their holiday to Beijing and showing their friends pictures of us.Â  Weird.

Even when we werenât being photographed, we were being watched.Â  We had many meal where at least one person from the next table was turned around in their chair watching us continuously.Â  I would look at them, just to acknowledge that I knew they were staring and said Ni Hao but they would continue to watch us like we were a show for them.Â  After a few days, I got used to this.Â  But, if you have kidsâespecially more than oneâyou know that you sometimes need to raise your voice (âDonât pick that up off the floor!â, âJust donât touch him, okay?â, âWhoever is kicking had better stop!â) and it was difficult to do this when you have several eyes on you.

We spent two weeks there.Â  We saw Tiananmen Square, the Great Wall, the Forbidden City, the Olympic Village and several other sites.Â  Iâll write some more on what it was like in future posts.

I plan on returning to China (to Dalian) in a few months to meet with some software companies.Â  But for now, Itâs nice to be home.