So, this morning I get called downstairs because the kidâs computer is filled with viruses.  Iâve heard this before, so I wasnât panicked.  We have up-to-date virus definitions and the kids know to be careful about what they download or sites they visit, so unless it is a threat that is really new, it should be okay.  I accept that it is still possible to get a virus on one of our pcs, but we try to be pretty vigilant.

But, when I looked at the computer, I nearly panicked.  Hereâs what it looked like: 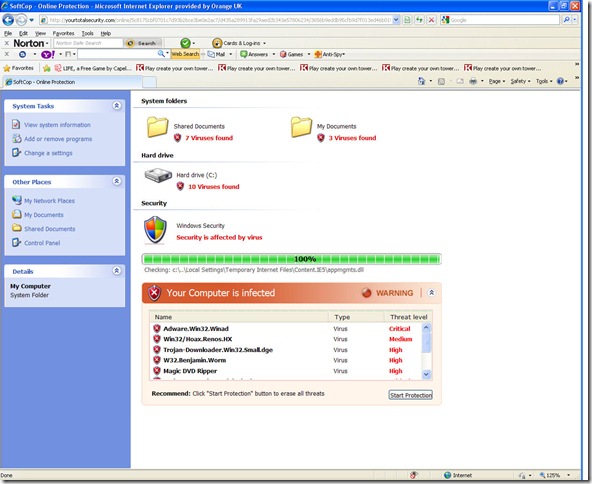 It filled the entire window.  My first impulse was to shut he pc down as quickly as possible in case it spread (I realise this may not be the most techie response).  The red â7 Viruses foundâ label was blinking.  How can you ignore the blinking text?

Then I looked closer.  I realised it was a web page disguised to look like Windows Explorer.  Our pc has more than one drive and the image only had a c drive.  I saw the URL in the browser address bar.  If I tried to right click on the image to view the source, it tried to download an executable.  When I viewed the page source using the menu items, the entire page was dynamically written with javascript.  Itâs scary to think that things like this are out there.  I was able to figure out that it was just a browser popup with an animated image, but not everyone would be able to see it so quickly.

I showed the kids why it was fake and how to spot it if it happened again.  Someone had downloaded the exe before I got there, but the real Anti-virus picked it up and removed it.

I suspect that it would install a new anti-virus on your pc and then tell you it expired so you could renew it.  Iâm not sure how it works or if there is a legit company behind it, but it is very sneaky and under-handed.