Of all the pictures I was going to take in Beijing, I was most looking forward to the one of me standing in front of the Mao portrait at Tiananmen Square. Everyone gets that picture.Â  Iâve seen it in books so oftenâwith itâs bold Chinese characters on the read wall behind.Â  This picture was going to be even better than one standing on the Great Wall.

Well, wouldnât you know it?Â  The entire time we were in Beijing (two whole weeks!), several of the monuments in Tiananmen were covered in scaffolding.Â  In this picture on the right, you canât even see the âPeoples Republic of Chinaâ characters because they are behind green scaffolding.

I kind of felt like Chevy Chase in National Lampoonâs Vacation when he drives cross country to Wallyâs World to find out that itâs closed.Â  I wonder what tourists to New York thought in the eighties when the Statue of Liberty was in scaffolding for months while they refurbished it for the 1986 anniversary. 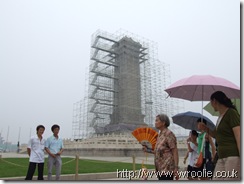 The 60th Anniversary of the PRC is taking place next month, so they must be getting ready for that.Â  Even the Monument to the Peopleâs Heroes in the square was covered in scaffolding.

It wasnât too bad at night, you could still see the characters when they were illuminated.

Despite all the maintenance, the square was packed every day we went (we found ourselves back at the square about 4 times in total).

I mentioned in the earlier post that I was surprised by the number of Chinese tourists.Â  For some reason, I expected all the tourists to be from the west.Â  But most of the tourists were from around China making a once in a lifetime trip to see their capital.Â  Itâs no different than the tourists in the States who make the cross-country trip to Washington DC.Â  Iâve been living in England so long I forgot what is was like being in a big country.Â  In fact, the Chinese tourists had more reason to be visiting than I did, I guess.Â  They werenât put off by the maintenance work at all.

Another site that was closed was the Science and Technology Museum.Â  We took a taxi across town the visit the museum, but when we arrived (and our taxi left), we found that it was closed for a month for renovations.Â  There were several âunofficialâ taxi drivers swarming around like vultures in the front of the museum trying to get us to take their taxis to another site like the Beijing Aquarium.Â  We stood there, not sure what to doâbut I was sure I didnât want to watch fish at an aquarium.Â  I noticed a man with a young boy who seemed to have made the same mistake we did and was trying to decide where to go next.Â  He was being hounded by the drivers just like us.Â  I walked over to the man and asked him where he was going next.Â  He seemed surprised that I was trying to talk to him in Chineseâbut I was obviously not a driver and not trying to sell him anything.Â  He told me that they were going to find the underground train and go to the Military Museum.Â  I asked if we could follow them.Â  We had only been taking taxis until then, so it sounded fun.Â  The drivers were annoyed, but we all walked off.

We walked with this manâs family (himself, his wife, and their son) and another family they were friends with for about a mile and a half to the underground station.Â  They were visiting from Inner Mongolia.Â  We talked about school out there and they were very interested in our 3 children.Â  They didnât speak any Englishâbut they told me their son was learning English in school (he didnât want to show me what he knew).

There were two boys in their group.Â  I asked if they were brothers.Â  One boyâs mother told me that they couldnât be brothers because China has too many people.Â  They could only have one child.Â  I knew this, of course, so I felt a little stupid.Â  Then I asked if they were cousins.Â  No, she told me, they are not cousins but only friends.Â  The one child rule came in in 1979.Â  I realised that China would not have siblings, but I never considered that this would one day mean no cousins, no uncles, no aunts . .

It took us ages getting to the subway stationâthe other Dad, being a tourist too, really had no idea where the station was but shared my keen sense of direction.Â  We stopped and asked a lot of passers-by for directions.

The subway train we rode was very crowded.Â  The Beijing subway at 2pm was like the Central Line at 5pm.Â  It took a couple of hours, but when we finally arrived at the Military Museum . . . it was closed.Â  It was Monday, and the museum is always closed on Monday.Â  But I didnât mind.Â  This was the only real time we were able to have a lengthy conversation with a Chinese family.Â  If the Science Museum had been open, we wouldnât have been able meet them at all.

It was a great experience.