I started learning Chinese when I was 18 years old.

I didnât choose it, but it was assigned to me.Â  Iâve been using it here and there for the past 19 years.Â  I occasionally start up conversations with Chinese people I meet on the street (sometimes to the embarrassment of my family) and try to read Voice of America articles online from time to time.Â  A few years ago, I paid a tutor to meet me during my lunchtimes once a week so I could practice speaking and reading Mandarin. 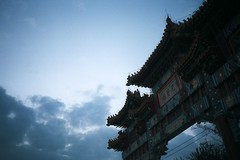 It is a skill that is not critical to my job, but I try to maintain anyway.Â  A few years ago, I was able to translate (surprisingly well) for a group of Chinese visitors who were involved in a joint venture with the company I was working for.Â  Last year, I met with an official at the Chinese Embassy in London where we discussed software offshoring for almost an hourâentirely in Mandarin.

But Iâve never been to China.

Iâve always intended to go, but there was always a reason it was not possible.Â  Most of the time, it was too expensive to go.Â  Then, with small kids, it was just too difficult.Â  Sometimes, the scarce holiday time was used to go back to the States insteadâto spend some long overdue time with my family there.Â  Even this year, I had scheduled a trip to Dalian, but had to cancel because of problems with my UK visa being transferred to my new American passport.Â  Sometimes it feels as if I will never make it there.

Tomorrow, Iâm going to Beijing.Â  Iâm very excited.Â  This is the one place in the world Iâve always wanted to go.

There are still possible obstacles in the way.Â  Already, the travel agent has given me problems about the fact that the first name on my plane ticket is not spelled exactly as it is on my passport.Â  âIâm sorry, we canât change it now.Â  Even though it is an E-Ticket, you either have to rebook the flight and lose all of your money, or hope that the Customs and Excise people are reasonable and let you through.âÂ  Even though my visa and passport are in order, my trip may be cut short due to bureaucracy around the ticket.

Iâm also concerned about the swine flu.Â  Iâve been reading all over the web about people being put into quarantine for 7 days in China because someone on the flight had a temperature.Â  From what Iâve read, someone will board the plane upon landing and take everyoneâs temperature with a temperature gun.Â  If someone who sits around you has a temperature, you could be spending time in quarantine.Â  I thought about waiting until Swine flu is over, but who knows when that will be?Â  There will be another reason next year not to goâand the year after that.

When I was first learning the language, we had Chinese teacher who would talk about the streets of Beijing.Â  I can remember trying to say something I considered complicated in Chineseâstumbling over the wordsâtones all wrongâand Iâm sure it sounded horrible.Â  He would look up at the ceiling while considering what I had said.Â  To be polite, he would always say, âIt wasnât exactly right, but if you were on the streets of Beijing, they would understand what you just said.âÂ  Well, weâll see.

Last year, when I met with the official at the Chinese Embassy, I mentioned that I started learning Chinese in 1991âsoon after the Tiananmen massacre (âNote: NEVER mention the Tiananmen Square massacre to someone from China!â).Â  I told him that I planned on visiting China one day, but wasnât sure when.Â  He looked at me and said, âEric, China has changed so much since then.Â  Itâs completely different.â Iâve been watching the news and know that China is growing quickly.Â  But, when he said that to me, I felt kind of sadâlike I was letting it slip away from me.Â  In the movie âDances with Wolvesâ, Kevin Costnerâs character chooses to go to the frontier so he could see it before it is gone.Â  I feel like I need to go to China before it changes further.Â  I want to see China while it is still China.

I hope Iâm not too late.