Last month, I was supposed to go to China.Â  I had planned to attend the CISIS conference in Dalian. This is one of the largest technology fairs in China for IT Service companies.Â  I had the flight and hotels booked and registered with the conference. I worked with the UK Trade and Investment office to set up some private meetings with Chinese software companies, too. 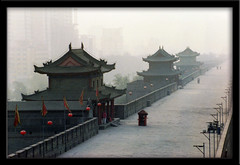 The problem I had was that my American passport had less than 6 months time left on it– a China visa requires more than 6 months remaining on a passport.Â  The Chinese embassy also wouldn’t give me a visa from the UK unless I had proof of permanent UK residence in my new passport.

I had 6 weeks to get everything sorted before the conference.Â  But I had to (1) get a new American passport from the US, (2) get my UK residency visa transferred to it by the UK Home Office, and (3) get a visa from the Chinese embassy.Â  The US got me the new passport in three weeks, but the UK Home Office took 5 weeks to transfer the residency visa over (I tried to speed it up, but bureaucracy is bureaucracy and no one could help).Â  I had to cancel all my travel plans and lost a few hundred quid in the process.Â  It’s not easy being an expat sometimes.

So, now I’m making new plans for a new China trip.Â  I’ve missed the CISIS conference, but still plan to visit some Chinese software companies out there sometime in the next few months.Â  Now that I have a brand new US passport and my UK visa seal is all up-to-date, I’ve sent my visa application to the Chinese embassy in London.Â  This time, I won’t make any travel plans until I get the documents in hand.Â  I’m going to wait until after the summer holidays to book any business meetings out there.

According to the Chinese London Embassy website, the visa process for China should take only 4 days.Â  They have a site called VisaForChina.org.uk which is dedicated to issuing Visas from the UK (due to the large amount of visa requests they get).Â  The site has some problems.Â  The English wording is obscure in some places.Â  It also has a visa application wizard you can fill out online, but it crashes on the first page in Firefox and gets all the way to the last page in IE before it displays it all back to you as null fields and errors on the form (better to download the pdf and fill it out by hand).Â  But, it is a helpful site.

I’ve had a few people from my last job ask why I’m not in China yet.Â  This is why.Â  Things are up in the air now, but I’m enjoying the sunshine of the summer.

I’ll keep you posted, of course.