Yesterday I was showing my iPhone to a colleague when I started playing with the settings and found out that it was even cooler than I had thought.

One of the most difficult aspects of trying to read Chinese is looking up characters in the dictionary. If you recognize a character and know how it sounds, you can look it up via the pinyin romanization. However, 9 times out of 10, you don’t know what it sounds like. So, you have to look determine what the character’s radical is and check that radical in the radical index. That will then tell you where in the dictionary to look for your specific word. It takes ages.

Most Chinese-English dictionaries I’ve had have a very worn our radical page. 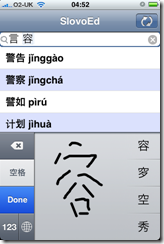 I downloaded some dictionaries for my iPhone a while back to have a play with them. The dictionaries were cool, but it still relied on me entering text via the online keyboard. I never checked the international settings and found that I can set up more than one keyboard on the device. I could also select to enter Pinyin or draw actual characters.

Now I can draw a character into the dictionary program (I’m using Slovo-Ed at the moment) and immediately see a list of characters which look like the one I’m trying to draw. It is really, really cool.

Seriously, if you have every used a Chinese-English dictionary, you will know how much of a time saver this would be!