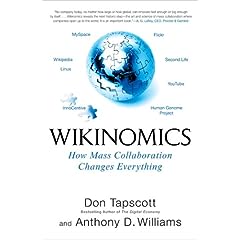 One of the books I’ve read this Summer is Wikinomics: How Mass Collaboration Changes Everything. I read this as I was helping a small company set themselves up for working in a distributed virtual team environment for their software development (the kind of stuff I’ve been using with Overpass), so I found the book to be very relevant to what I was working on at the time.

Wikinomics is the authors’ term for the new economy of Web 2.0. It centers around open source, open APIs, and collaboration between companies and customers. The book talks in great depth about the new trends and technologies that have been emerging in the last two or three years.

Web 2.0 is a strange term that I don’t really like very much. It’s something that marketing people and senior managers like to use to impress each other. But after reading this book, it is easy to see all the changes in thinking that have occurred in the past few years. It’s been gradual, but the world has changed significantly since 2004–at least as far as the internet is concerned.

I highly recommend the book. It’s not aimed at software developers, but it really opened my eyes to what other developers are doing out there. It’s definitely worth a look if you have the time.