I’ve been reading up on world population. It has been on my mind since I started eating more vegetarian food last year. Going full vegetarian didn’t work out as well as I’d hoped, but I eat a mostly vegetarian diet now. 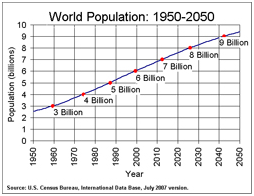 I remember hearing about population growth back in high school and finding it surprising, but life goes on. What can we do about it?

In a few years, the population will be double what it was when I was born. That means there will be twice as many people in the world as there were when I was a child. It will answer a lot of questions:

“Why are there so many damn celebrities now?”

“We used to take long car trips all the time. Now they complain about global warming. Why wasn’t it a problem back then?”

“Why do we have genetically-modified food? I want all my food natural.”

“What’s wrong with eating meat at every meal? People have been doing it forever.”

I often thought about world population when I was studying History. You read a biography of someone like Benjamin Frankin and are in awe of how much he accomplished in his life due to his genius. It’s very easy to wonder why there is no one that smart today. However, there are probably people all over the place who could accomplish more, but they are lost in this sea of 6 billion people. They will only be noticed and achieve that kind of notoriety today if they become a contestant on a reality-based tv show.

In high school, I can remember being told that Lincoln never finished school but became one of the greatest presidents of the United States. One of my teachers actually said, “So if you don’t get good grades, don’t worry. One day you could be president.” The reality is that competition for political office was very low compared to today. The world is too crowded now and the entry levels are too high.

As an American, I was brought up to believe that owning your own land and doing whatever you wanted with it was a testament to your freedom. “One day, you will own your own plot of land, be it a house or a ranch or whatever. That’s because we live in a free society.” However, you can’t ever really own land. Anyone who has ever lost their property in political upheaval will tell you that. Logically, how long can the three billion people who owned the land in 1965 tell the three billion people born since then that the land has all been bought up? How long can the people who own land now hold on to it as three more billion people join the earth in the next forty years?

Meat, for me, is the hardest thing to cut back on. I tried going completely vegetarian, but the smell of bacon will always turn my head.

Meat eating is identified as one of the causes of global warming. At the Live Eath concert, they even recommended having one vegetarian day a week. The problem is that the methane produced by all of the livestock exceeds the amount of greenhouse gasses produced by our cars. People have always eaten meat, but never before have so many people been eating it for 2-3 meals a day, every day. I’m one of the worst, but I’ve cut back in the last few years. Now, China is getting into more meat-based fast food. By the end of the year, KFC will have more than 2,100 restaurants in 400 Chinese cities.

When you try to go vegetarian, you realize how much meat is over-used. Even food you would expect to be meat-free, like salad, will often contain meat in them. Too many fast-food restaurants will have a “Chicken Salad” or “Bacon Salad”, but assume no one would ever buy a “Salad salad”. If you are going to eat a burger or a steak, eat a burger or a steak. If you are going to eat salad, eat salad. It doesn’t all have to have meat. Meat-based foods should be the treat we give ourselves as we savour the taste of a nice juicy burger and not something we mindlessly chew and swallow while our minds are on something else. Meat-based foods should be the exception, but as every vegetarian will tell you as they peruse shop shelves for a tiny benevolent “Suitable for vegetarians” label, meat-free foods are not easy to come by.