Tomorrow night, Iâm going to attend an Oxfordshire Tweetup at the Fallowfields Country House near Abingdon.  Iâm not sure what to expect, but I saw it was coming up and thought I would check it out.  A tweetup, as I understand it, is just a bunch of Twitterers getting together to meet each other.  I follow a few people in the Oxfordshire area (they actually help me by letting me know when the roads are bad or if there is anything interesting going on in the area) and it would be nice to meet them.  Iâm not sure what to expect really, but it will be nice to meet some new people.

A few years ago, when ECademy was at itâs prime, I attended a local networking evening.  It was okay, but it was really a room full of people trying to sell themselves and their companies.  I never met so many life coaches as I did that night.  But it wasnât awfulâand i met some nice people who I spoke with afterwards.  Iâm hoping that the tweetup is not so business-focused.

Iâm looking forward to it.  Iâll let you know how it goes.  If you live in Oxfordshire and want to attend, the url to register for the event is here: http://twtvite.com/mkp8da

BBC started airing a very good documentary about the internet a few weeks ago called The Virtual Revolution.  I finally watched the first episode just the other night.  Itâs amazing how much has happened in such a small time.

It was a fantastic documentary and it really makes you think.

We are still very much in the beginning of all of this.  There are still things to be done that no one has thought of yet.  We still havenât reaped much of the benefits that the improvements in communication channels will have lent to science and medicine and as much as the internet has changed all of our lives, Iâm sure itâs nothing compared to whatâs to come.

I routinely chat with people in China and India (and back home in the States) while visiting offices here in the UK. In high school, these places all seemed so far away.

This twenty years of the internet will one-day seem like just a blip to us.  One day years in the future, people will talk about how the newspapers and music industries cried foul before they found their own way.  We will talk about the quaint days of waiting for our favourite TV programs to be aired.  Soon, we will look back on Twitter and Facebook the same way we look back on the old newsgroups (it was all so crude!).

The other day I found myself falling into the trap of thinking that everything had been invented already.  Surely, there are no new opportunities out there because theyâve all been invented.  Or, someone is already working on them.  But the truth is that weâve hardly scratched the surface.

There are still things that arenât quite right in technology.  Still loads to do.  For example, as much as webcam chat is fantastic and a nice novelty, itâs still too complicated to get âordinaryâ people to use it.

As much as things change, we still think in old terms.  Artists still come out with Albums, even though we can buy and download only the tracks we want.  Why do we need the album grouping?  We still have business people who think they need to fly thousands of miles to have a meeting in another office, because we havenât found a method of communication that is better an 8 hour flight.  Too many of us still get up in the morning and drive or take a train to an office building to do work that could easily be done at home.  When we get to grips with some of these new realities, we will start thinking differently and even more innovation will come.

I was reading the xkcd comic strip (if you havenât read it, youâre missing outâhttp://xkcd.com), and saw this this strip:

2003 wasn’t that long ago. Or maybe my age is just catching up with me. 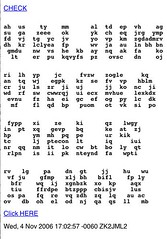 I woke up this morning to about a hundred out-of-office replys in my inbox and junk mail folder.Â  It turns out, someone is using my Overpass.co.uk domain in an email reply-to and sending out loads of sex-related spam.

I’ve been searching for what to do about this, and it turns out that there’s not much I can do.Â  Since the spammers are not sending from my server and only using the reply-to, all I can do is hope that it stops soon.

Apprently, this is a pretty common problem.

If you get an email from Overpass, it wasn’t sent by me.