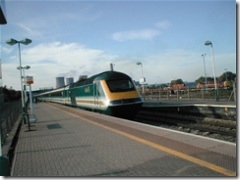 I realised that I have a tendency to ignore our receptionist. I give a little smile when passing by in the morning, but our office layout requires walking past several times in the day. I donât want to say hi every time I pass, but I donât want to look like I ignore her either. I try to carry something with me so I can pretend Iâm reading it every time I walk past.

Itâs not that I donât like the receptionist. She is very nice. I hear people visiting the building stopping and flirting and making cute comments about this and that with her. They have a laugh, talk about nothing in particular, and pretend they got something out of the human interaction. I suppose this doesnât make much sense.

I used to work at a Super 8 motel in rural Missouri for about a year while I was attending university. I was the night clerk. I ran the motel from 11pm to 7am by myself and attended school after work (I didnât sleep much in those days). During my shift, Iâd sit there behind the front desk and watch people walk back and forth to their car to carry their bags into their room. Each time they passed me, they felt they had to say somethingââJust getting my suitcasesâ, âJust a couple more tripsâ, âJust one more nowâ. Like I care! They didnât have to say something EVERY time they passed by. But, I think they felt rude if they didnâtâlike I would somehow feel under appreciated.

So, I mostly ignore the receptionist. I walk while examining some papers that are obviously so important that I donât have time to make eye contact and say something useless like âjust off to the loo.â

I don’t know very much about chat etiquette. I can hold a normal conversation just fine. Email is easy enough. But the chat, that’s something all new to me.

Instant messaging is a great tool. It serves as a nice half-way point between email and phone call. I use it a lot for Overpass business. If I need to send you a message to say something like “Feel like going to lunch?” or “Are you watching the news right now?” then text chats are great. I don’t want to interrupt you with a phone call if your busy, but I don’t want to wait for you to check your email when it’s too late.

But when someone starts a chat message through Skype, MSN, or Yahoo and talks forever–I want to ask them for a voice conversation. I don’t like typing something and watching the “So-and-So is typing reply . . .” in the status bar. I start to get overly critical of their typing speed.

I often answer questions while they are typing new questions, which gets confusing.

There also seems to be no clear way to end a chat.

(I think it should end here, right? Close the chat window, but it pops up again)

Otherperson: Have a good weekend.

You see what I mean? It just goes on and on. I’ve spent twenty minutes in a chat conversation where my mind starts to wander and I surf while waiting for the other person to type a message before seeing “Otherperson: Are you still there?”

The needs to be chat rules. Anyone know of any?