Recently, I started optimizing my LinkedIn profile and just accepting anyone who wants to connect. I used to be very stingy about connecting . . . but then I realized I didn’t really read what most people wrote on LinkedIn. I expect people there to spam me. And believe me, with Overpass I get tons of spam.  So, I’m happy to connect with anyone.

But I won’t accept just anyone as a Facebook friend. That’s not for business. True, a lot of the stuff that is posted there is a bit self-serving and annoying. And I suppose I have occasionally posted about an Overpass project I’m excited about. I don’t post too much.  But I will unfriend anyone who tries to sell me something. My friend request queue is full of people from offshore companies who want to cozy up to me.

Today, while at Subway grabbing a quick lunch (I’ll do this maybe once a week or two weeks), they gave me a Christmas card. It was really cool. I posted it on Facebook saying that every fast food restaurant knows me (which many do). 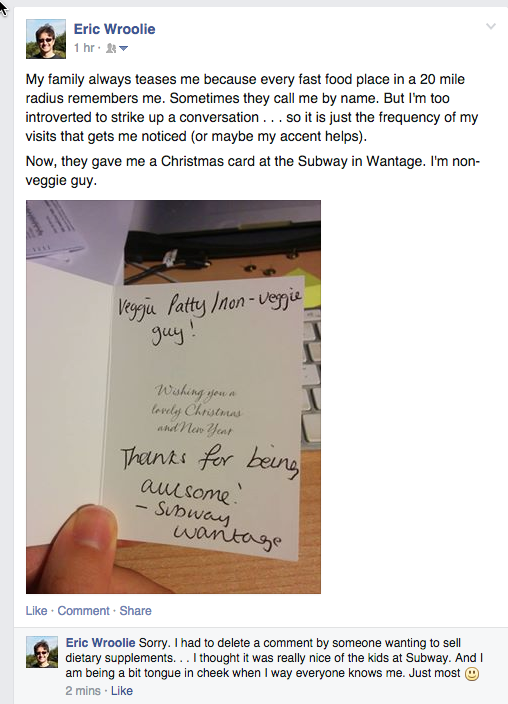 One of my friends from High School sells dietary supplements (or some weight watchers thing or something). She saw this as an opportunity to strike. She commented “Sry but this is so sad. You shouldn’t go to so many fast food restaurants. If you want to try healthy food, I have plenty :-)” or something like that. I wish I could say this didn’t bother me. But it did . . .big time. Not only was I insulted . . . . but I was angry that I shared something I thought was funny and it was used to try to sell me something.  I deleted the comment and unfriended her. I would never speak to a friend like that . . . but I never knew her that well. I should not have let her into the inner circle.

With Overpass, I am a terrrible salesman because I hate this attitude. I hate the idea of looking at others as leads or prospects. I certainly hate being seen as a lead or prospect.

Ever say anything on Twitter and get immediately (automatically) favourited or retweeted? That’s someone’s tactic. Every marketing book tell you to be personal in this way (the “tactic” alone makes it phony).  I don’t like to share a lot online for this reason.

Occasionally, I’ll open up Twitter and look at nearby tweets. It’s usually kids tweeting at each other and being childish and stupid . . . and I love this. This is the way it was supposed to be. This is organic and people communicating with each other. No tweet schedules or “retweet if you agree” or searching for keywords. Marketing ruined all this (the same way it made email so difficult).

Anyway . . . rant over. If you friend me on Facebook and I don’t accept . . . please, no hard feelings. But connect with me on LinkedIn and you can spam me until the cows come home. I don’t mind.