I woke up this morning to watch the Obama State of the Nation speech.  I only caught the tail end of it, so am trying to find a recording.

However, CNN has done something interesting with Facebook.  When I clicked on the media player to watch the event, a Facebook sidebar was displayed in the window so people could update their profile.  A scrolling list of other people’s comments.  While watching the video, I could easily comment onto facebook about anything that was said. 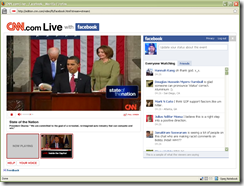 Facebook has been able to reach out to people far better than other mediums.  Blogs were difficult and too self-indulgent for some.  Twitter is still too new.  But in the past year, it seems like everyone is getting into Facebook.  So much so that CNN could use it for it’s prime tool of keeping the public involved.

We’ve moved so far past television.