This weekend I watched my first Hindi film. I know I could have watched one without taking a Hindi course first, but this was the whole reason I wanted to watch it.

I searched the local Blockbuster for films in Hindi, but it’s a small town and they don’t really have any. So, I ordered a few from LoveFilm and finally had one delivered last week. 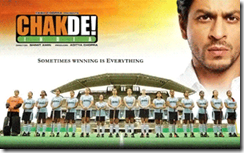 I watched Chak De, a film about the a national India Woman’s hockey team. I really enjoyed the movie. I found out from friends at work that it’s a very popular international film. I guess I shouldn’t feel too multi-cultural for having watched it, then.

The movie was really good, but I was surprised at how long it was. It was almost two and a half hours. Just when I thought it was over, it had an “Intermission” card go across the screen.

In terms of Hindi practice, despite being a Novice, I understood a lot that I could identify. My favourite sentences were the really short ones like “Con?” and “Kew?” and I was surprised how much English was thrown in.

My favourite scene was the fight in a McDonald’s. I’m a simple man.

I have a few more films selected on LoveFilm, but they seem to be very slow in sending them.