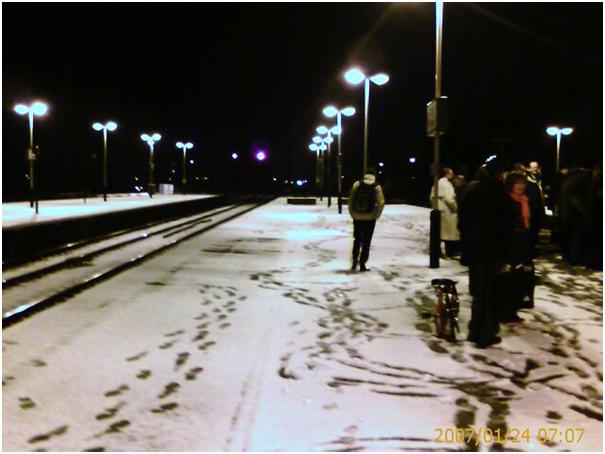 This morning the people of Southern England were greeted with a couple of inches of snow upon waking up this morning. This made travelling to the Didcot from Wantage pretty difficult. The roads were gritted, but the pavements were still covered in snow and ice. The car park and pavement at the Fox Hall car park in Didcot were unmaintained. Apcoa has to be one of the most rubbish companies I’ve dealt with since being in the UK. That’s saying a lot. I’m sure I’ll moan about them on a later post.

I don’t like walking on snow. I’m from California and have never really been used to it. All it ever brings me is misery.

When I was a teenager, during my senior year of high school, my family moved from beautiful San Diego to Springfield, Massachusetts. We moved just before the snow began to fall. It was a cultural experience getting used to things on the other side of the country. In the last year of my mandatory education, I attended Springfield Central High School.

I was moving to a new high school in the last year I was supposed to attend high school. While my new fellow classmates were discussing how this year would be the ‘best in our lives’, I was trying to make new acquaintances and spending a lot of lunchtimes sitting at the table of loners and losers (the L&L table, I guess).

It was December. I had been in school for just a few weeks and, unlike my former life in California, I found that girls actually liked me. I had this rumour going around that I was the California guy. Even to me, this sounded pretty good. I had this mystique around me. I tried to open my mouth as seldom as possible?even sitting at the loner table was good for my image. Maybe it would be the best year of my life.

In Massachusetts, it snows a lot! I can remember my wet hair freezing while I waited for the school bus in the morning. But I was getting used to it. I started to like the snow covering everything. Everything was white and new.

One day, while leaving the front of the school and walking towards the school buses, I walked across an un-shovelled bit of pavement. I like to make new footprints on a fresh patch of snow. I was wearing an old Marines overcoat that I got from a thrift store and walked my mysterious-loner walk (hands in the pockets of my coat, kind of shuffling more than walking). I looked really cool. I had left my past. I wasn’t the geek people went to elementary school with. I was the new cool guy.

As I walked across the snow, my feet flew out from underneath me. I couldn’t get my hands out of my coat pockets. My chin hit the pavement first, with the rest of my body falling behind.

In a split second, there were roars of laughter from everyone. I heard them while laying flat on my face. The entire school had left the building and everyone was laughing at me. I hope they are all working in petrol stations now. I reacted how anyone would?I jumped to my feet and kept walking like nothing had happened. Just checking the pavement.

I walked for the bus a little faster than before. If I can get there before the embarrassment actually hit me, I wouldn’t risk having my eyes well up before everyone. That would look real tough?to just start crying in front of everyone.

The Florence Nightingale of the school ran up beside me as I walked. “Are you okaaaay? Are you alright?” I could tell she was always the first one to a crisis to offer her superficial sympathy. I’m just that kind of person. I’m just so compassionate.

Then she screamed (louder than I would have liked) “Oh my God! You’re bleeding!”

I looked down and saw that my sweatshirt and coat were covered in blood and reached for my still-stinging chin. I was bleeding?a lot. Nurse or bus? “Just forget it!” I ran for the bus?grabbing a tissue from my pocket (I’d already wiped my nose with it throughout the day) and covering my chin. She let me go.

My brother was on the bus and immediately asked me if I had gotten into a fight. When I told what had happened, he sympathetically laughed at me.

When I got home I found the cut was pretty deep and probably needed a stitch, but I just put a plaster on it. For the next week, I looked like I had cut myself shaving every morning. I wasn’t the cool guy at school anymore?at least I didn’t feel like it. I just waited out the last few months of high school before joining the Army.

I still have the scar and it makes me have rubbish stubble.

So this is what I think about on the rare occasions we get snow in the mornings. I’m sure it will be melted by tomorrow?maybe even for the trip home. I walk very carefully. Now, I don’t think that the people waiting for the train at Didcot will openly laugh at me if I should fall?and I don’t have any street cred to maintain?but I still walk carefully in snow with the heavy fear of public humiliation.